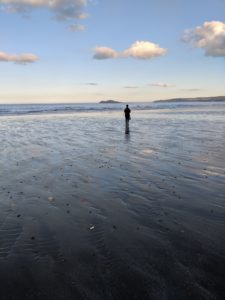 Having a disease is not an excuse to be unhealthy. Having a diagnosis of a chronic illness is not a reason to live your life as though you are sick. There is a difference between having an illness and being sick. It took me years to figure that out. Since my diagnosis of Multiple Sclerosis in 2002, I’ve felt paralyzed by indecision- should I exercise, what could I eat, will I be up for the next party? I was afraid to do anything that might make my MS worse. So I did nothing and I ignored my symptoms. I was determined to live my life as though nothing had changed. I plastered a smile on my face and pretended everything was fine. I didn’t eat well. I didn’t exercise. I felt like crap. Over the years, I went from feeling that MS was just a huge inconvenience to letting it control my life. I became self-doubting, unsure, and reticent. The girl I used to be was gone and in her place was someone I did not know.

People told me that because I had MS, that I couldn’t do certain things and I believed them. I let people put me in a box of their perceived ideas. I came to believe that I was somehow broken. That because MS was unpredictable and possibly debilitating, that I couldn’t plan a future. I was letting my life just pass me by.  I had to stop obsessing about the things I couldn’t change. I needed to stop letting fear drive my decisions and actions. I had developed bad habits that were stifling me. Behaviors that were destructive and diminished me. It took me a long time to finally accept that my life had changed irrecoverably and that I needed to adapt to move forward. I chose to develop healthier habits to help me to adjust to my new normal. My goal was to be that confidant, fearless girl that I once was. The girl who knew that MS might side-track me but it would never defeat me. I took a long hard look at my habits and chose the top three that I needed to change to improve my life. I decided that I needed to be strong both mentally and physically, so I could deal with whatever life threw at me. I proceeded to work on the following:

That meant my diet had to change immediately. It was a big change, so I broke the plan up into smaller goals. I started with no processed foods or added sugar. I learned to cook. I filled a ¼ of my plate with vegetables at each meal. I continued to add more vegetables into my diet until eventually my plate at any given meal was ¾ vegetables. Eating vegetables for breakfast was a new concept for me and at first, felt weird but now it’s automatic and I enjoy them. Each week I’d add a new kind of vegetable that I hadn’t tried before. I had to learn how to cook them so it got a little creative. It made it fun. Before long I was eating healthy.

I added exercise to my morning routine and began to walk daily. I never thought about it. I’d just wake up and go before I found a reason to blow it off. My goal was one hour a day, but I started with whatever I could do. I left extra sneakers, workout clothes, and raingear in my car in case I had to walk after work. I tried to walk outside and find new paths and parks to explore to keep it interesting. I began to look forward to the solitude as a way to unwind and clear my head. That time became sacred to me. I had found a way to get in shape, build strength, and de-stress all at the same time. A win-win.

To me being resilient is the difference between being able to get through hard things without totally freaking out, and caving under the pressure of every new problem. Having MS sucks but it’s not a reason to view everything in life like an obstacle. Things might be harder, tasks may take longer,  but you have to believe you will get there in the end. I made a decision to stop being so hard on myself. I’m very type A, so practicing to just let things go was a daily trial. I repeatedly told myself that good enough was good enough. I made an effort to put things in perspective. I learned to acknowledge my feelings, good or bad, and let them go.  We all have what it takes to be resilient. We just need to find that inner strength.

What helped me to achieve these goals was envisioning my life once I did. I’d be healthy, strong, and confidant. I’d be more spontaneous. I would travel. I’d have hope. Changing just a few habits gave me my life back.